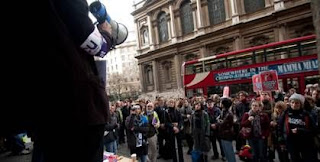 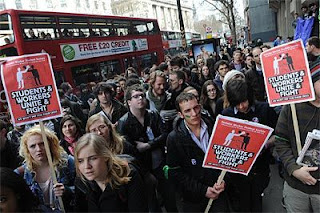 Last Tuesday’s (30 March) strike in defence of education at King’s exceeded all expectations. More than 250 people joined loud and vibrant picket lines on all four King’s campuses. Security guards at one campus indicated that numbers entering their building were as much as 75% down. At the main building on the Strand only a small trickle of students and staff went in.

Support for the strike was boosted after the latest hapless intervention by senior management, who refused to allow non-UCU staff to take annual leave yesterday. This prompted more than sixty of those obliged to work on the Strand to sign a card expressing solidarity with the pickets. Members of other unions on all sites brought refreshments out to colleagues on strike and stood with them during breaks. Local cafes displayed UCU material explaining our reasons for striking. Students brought cakes for pickets, played musical instruments, set up stalls and hung a huge banner over the entrance to the Strand: ‘Education massacre: do not enter.’

Messages of support have flooded in from King’s alumni, students and non-UCU staff, as well as from universities and colleges across the country. Colleagues brought solidarity greetings and donations in person from UCL, Westminster, QMW, London Metropolitan University, the Institute of Education, Southwark College, City and Islington College, Tower Hamlets College, the University of the Arts and the London Nautical School. Supporters also came along from local workplaces, including the National Theatre and the National Gallery, and from other unions, including the NUT, PCS, Unite and Unison.

Around 50 people attended a lunchtime rally at Waterloo, while more than 200 students joined pickets for a rally on the Strand, which took place in an electric atmosphere. The huge crowd heard speeches from UCU representatives at King’s and elsewhere, from members of other unions and from a Sussex student who told of their struggles with their own management. Many students heard for the first time of the appalling treatment of our colleagues in Engineering by King’s management. The ‘We Support our Teachers’ campaign was a lively presence throughout the day. Dozens of students expressed their disdain at the way the College’s senior management addresses them in Orwellian ‘Newspeak’. Many have written to the Principal and Vice-Principal complaining that they feel patronised by senior management.

Our campaign in defence of education at King’s is partly about our colleagues’ livelihoods, and about the lack of regard shown to them by senior management. But it is clear that it is also about much more than this. The creeping culture of managerialism in universities is also an issue. The support we have received from students, and from colleagues who are either members of other unions, or not yet members of UCU, is an indication that this campaign is also about defending the values that underpin education at King’s and elsewhere, which include collegiality, respect for individuals, cooperation, intellectual integrity and academic independence.

The verve, humour, creativity and imagination of yesterday’s pickets offered us all a glimpse of the potential that exists within this institution for staff and students to make education at King’s more rewarding and more enjoyable. All too often this potential is either stifled or by-passed by the dead hand of senior management.

Our thanks and congratulations go to all who took part yesterday, and to everyone who showed their support for our campaign. Senior management teams across the country are offering no resistance to government cuts. They are determined to follow the example set by King’s and impose redundancies and department closures on their staff and students. The magnificent collective response to these attacks that we have seen at Leeds, Sussex, Kent and King’s is a powerful reminder to all that if we stand together we can defend our education system from the ministers and managers who want to turn it into a marketplace.

Please continue to send donations and messages of support to: ucu@kcl.ac.uk

For more information on our dispute see: http://www.kcl.ac.uk/ucu 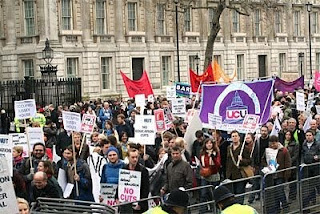 Around 1,000 students and workers from higher and further education joined the lively and vocal march on Downing Street on Saturday March 20th in protest against the government's education cuts. Delegations were present from many institutions including Queen Mary's, Westminster, University College, King's College, London Met, City and Islington College, Hackney College, CONEL, London College of Fashion and many others. A large group of staff and students from Sussex University joined the march, after their victory over management the previous week. Other trade unionists also brought their banners and solidarity to the demonstration, including teachers and civil servants. At a rally outside Downing Street, Kevin Courtney, deputy general secretary-elect for the NUT, and Austin Harney from the PCS spoke amongst others. A petition was then taken to Downing Street condemning the cuts in higher and further education.
Posted by ___________________________ at 4:23 AM